As a responsible company organizing events, we pay particular attention to the evolution and spread of the Covid-19 virus and will keep you constantly informed on the evolution of the situation. Following the regulatory protocol to combat and contain the spread of the Covid-19 virus in the workplaces, we had to work toward a re-modulation of our process. If you need to contact us, please send an email to m.bouvier@bordeaux-expo.com Our team will take note of it and will reply as soon as possible. In compliance with its primary objective and dispite the extraordinary situation, all our team remains at your disposal for any request and will make every effort to ensure good quality events.

Rare indoor show, unique in France, but that the public of Bordeaux passionately adopted since six years. 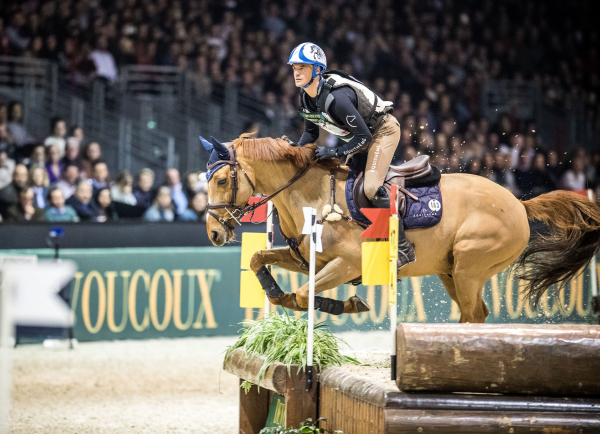 Initiated in 2014, and for the first time in France during the Jumping International de Bordeaux, this indoor derby gathered the best Indoor cross country riders for a breathtaking class that set the public alight.

The Jumping International has promoted driving through the different classes’ offered during the event, and decided in 2014 to honor another discipline of the equestrian sports, Indoor cross country. Authentic cross-country installed among the main arena and the warm-up arena, the Devoucoux Indoord Derby is a course composed by twenty fixed and showjmping-typed obstacles over a one kilometer ride. But be careful not to mixed up this competition with a true cross country one. The Devoucoux Indoor Derby is a version halfway between the cross and the hunting course that came back to the grid these past few years.

In 2019, this indoor cross was as thrilling as expected, both for the spectators and the best world riders who once again came to participate to this unique competition during the Jumping International de Bordeaux.