A unique horseball Game, presented by and for the Jumping International de Bordeaux! 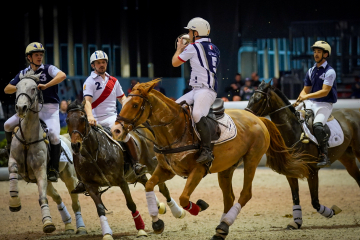 Horseball is a collective equestrian sport, invented in France at the end of the 1970s.

It is a reference throughout the world, as the French team is undefeated since the creation of international events in 1992: European and World champion. The French team brings back many gold medals every year!

A ball, 6 players per team, a 70x30m arena with 2 goals at the ends, do not keep the ball in your hands for more than 10 seconds, make 3 passes before you can score a goal, do not dismount to pick up the ball ... Simple rules for a simple goal : score as many goals as possible through attack and defense strategies. 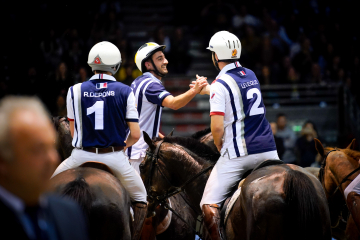 To the speed of the horse is added the one of the ball... Goals, great collective actions, goals and more goals, speed and technicality... A true show!

Supporters, players and coaches qualify horseball as a "sport/spectacle", because its interest is also linked to its spectacular, fast and technical aspect.

The Jumping International de Bordeaux invites you to a unique encounter in a supercharged atmosphere!